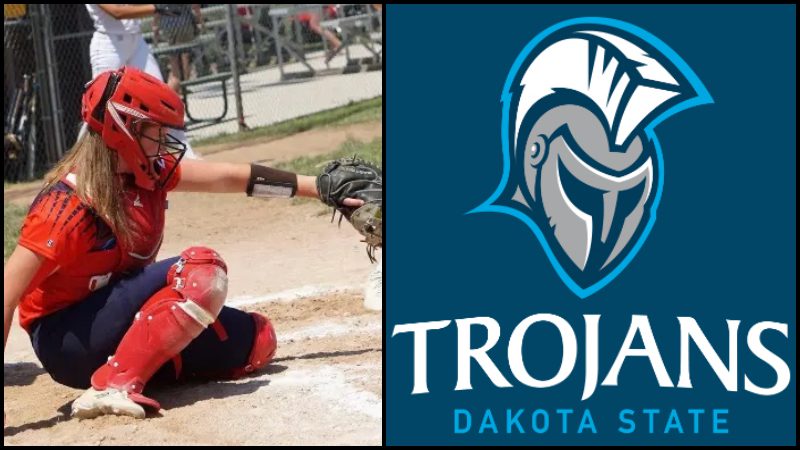 Catchers with strong defensive skills are hard to find. It’s also rare to have a 5-foot-10 first baseman in softball. Delaney Granger will provide both of these attributes when she continues her career at Dakota State University (S.D.).

“Delaney had multiple offers and had contacts with colleges from all over the country,” ScoutU’s Jason Lauren said. “She chose Dakota State in part because she wanted be farther away from home. When she visited DSU, the coaching staff made her feel at home. I’m so excited she found a great college fit for her!”

Granger’s arm (1.72 pop time) makes her quite valuable behind the plate. She also excelled during the last club season, hitting .526 with 13 RBIs in just 38 at-bats.

“Delaney has very high potential with her athletic size at catcher and power swing,” Lauren said. “She has a strong arm at 63 mph on the infield and is a very good athlete, also being a varsity basketball player. I’m sure she’ll have a great career with the Trojans!”

Dakota State’s roster is filled with many players from the central part of the nation, along with a few from California. Granger will bring a Wisconsin presence along with her strong work ethic and academic commitment (3.5 GPA).

“Jason offered advice and opened many doors for Delaney,” her parents Ethan and Erin said. “One thing that made this journey easy was Jason was only a phone call away if we had any questions regarding the recruiting process. He checked in with us frequently to see where we were in her journey and how he could help.”

“Jason offered advice and opened many doors for Delaney. One thing that made this journey easy was Jason was only a phone call away if we had any questions regarding the recruiting process.”