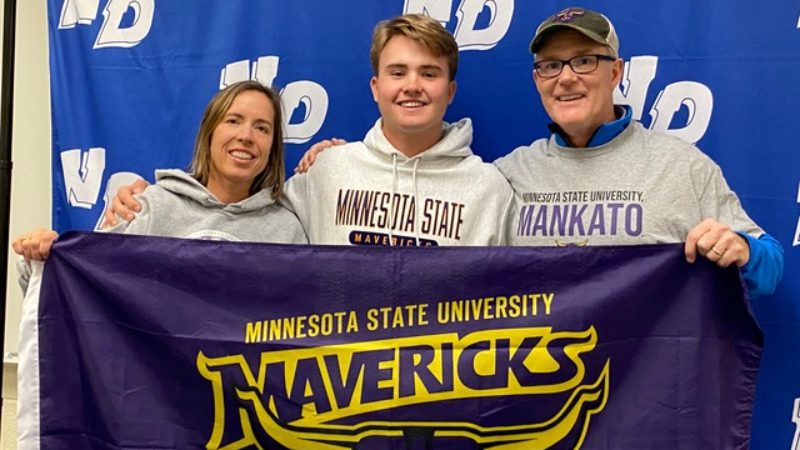 Sometimes, the recruiting process can move very quickly. Golfer Ryan Darling joined ScoutU in June 2021. Within weeks, he was communicating with dozens of college coaches. And now in November 2021, Darling just signed to play for Minnesota State University, an NCAA Division II school.

“A lot of colleges reached out to me,” Darling said. “Most of them were by email. I probably received 50 emails back from colleges and about 10 calls.”

Darling, who’s from Green Bay, Wis., focused his attention on programs in the Midwest. He was looking for a strong business major and a place where he could compete at a high level.

“Coach Alex Schmitz, who was just hired in August, really made my decision easier, and I look forward to getting to know him,” Darling said. “He definitely was one of the main reasons I committed there. I got to meet the captain of their team who was very nice and welcoming. The campus is also a very good size, along with how many students go there.”

Darling delivered a stellar junior season at Notre Dame Academy that included medalist honors with his 71 at the Regional Championship. On the 2021 Junior PGA Tour, he placed second at both the Tour Championship (69-73) and the Horseshoe Bay Championship (70).

“I am very excited, because I get to play the sport I love every chance I get,” Darling said. “I am excited to improve myself on many different levels. College golf will prepare me for many other things in life.”

ScoutU’s Jon Feyen was originally surprised that Darling didn’t have any offers by his junior year. It can be difficult for Wisconsin gofers to get the attention they deserve because of the state’s climate.

“Ryan is as talented as all the other scholarship golfers I’ve worked with,” Feyen said. “He can drive the ball 300 yards, is a great teammate and also takes his academics seriously with a 3.5 GPA. I can’t wait to watch him play in big tournaments at the next level!”

With just one senior on this year’s roster, Minnesota State has a young and rising men’s golf program. Darling is excited to lead that charge, and he’s thankful for ScoutU’s guidance in achieving his goal.

“Jon Feyen helped me by reaching out to as many colleges as he could have, and answered questions that my parents and I had for him,” Darling said. “He definitely impacted the process a lot in a very positive way.”

“Jon Feyen helped me by reaching out to as many colleges as he could have, and answered questions that my parents and I had for him. He definitely impacted the process in a very positive way.”