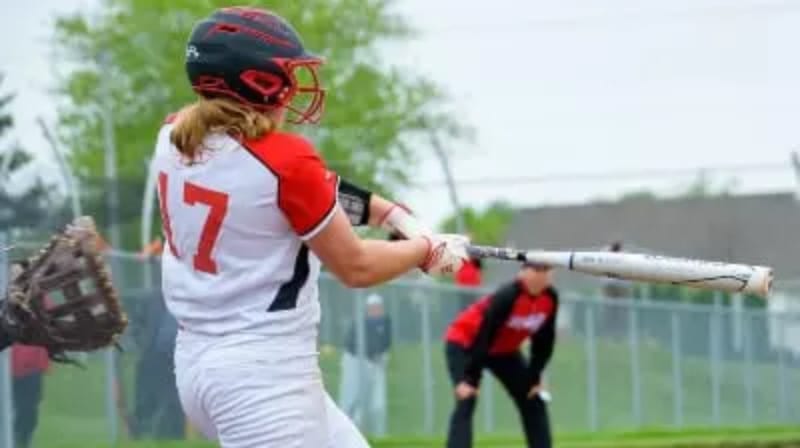 If we’ve learned anything from 2020, it’s that you need to be prepared for the unexpected. 2022 ScoutU softball prospect Mia Johnson dealt with plenty of adversity during her junior year — including suffering an ACL injury — but because of her dedication and persistence, she’s now committed to the University of Wisconsin-Parkside.

Johnson (South Milwaukee, WI), who also was recruited by numerous colleges for basketball, received a handful of offers to play at the next level. She had about 50 personal phone calls and emails to narrow down which school was the best one for her.

“I visited about 10 campuses, and I didn’t realize many of these schools existed before being contacted through ScoutU,” Johnson said. “Even though I ended up choosing a school less than an hour from my house, I feel good about that decision after having the opportunity to see so many different campuses. Lesson learned – you never know what is going to happen, so get on coaches’ radar as early as possible.”

Not only did Johnson have to deal with the challenges that COVID-19 brought to her recruiting process, her ACL inury while playing basketball on June 5 added another obstacle to her recruiting. She was fortunate, however, that she already was being recruited by several colleges before the injury.

“Mia was a great kid to work with,” ScoutU’s Jason Lauren said. “Part of her recruiting success was always being diligent on doing what she needed to do to stay in touch with college coaches. Unfortunately, she recently suffered an ACL injury playing basketball. If she wasn’t already on colleges’ radars, that injury would have been devastating to her recruiting with her being a rising senior, but because several colleges already were interested in her, I was confident she would still find a good college fit for her. Just a few weeks after her injury, she committed to UW-Parkside.”

Johnson brings a great skill set to NCAA Division II Parkside. She owns a 1.65 pop time and 59 mph velocity at catcher, while also hitting .734 with 8 home runs and 47 RBIs during her junior season.

“Mia is an excellent athlete,” Lauren said. “I helped with her softball recruiting starting in November 2019 and recently began helping her with basketball. She was recruited by several colleges in both sports. Her strength and athleticism aided her in both softball and basketball. As a softball player, Mia has a rocket arm behind the plate and is a power hitter. I expect her to do great things at UW-Parkside!”

Johnson collected Woodland Conference Player of the Year this spring, and she also delivers in the classroom with a 3.8 GPA. She’s looking forward to extending her career another four years.

“Parkside has a beautiful campus and offers the academic programs that I’m interested in,” Johnson said. “During my tour, I really liked meeting players and having the opportunity to ask them questions about what it’s really like to play at Parkside and live on campus. Coach (Kristin) Ortman is a very respected coach with a program on the rise. She has a coaching style that is a good fit for my personality. She came to many high school and club games over the last 18 months to really see me as a player both on and off the field. I have watched many Parkside games throughout the season, and think that I can really make a positive impact in the program. Go Rangers!”

Even with Johnson’s impressive statistics, it can still be difficult to be noticed by the right programs. She is thankful to have ScoutU leading the way.

“I have been working with Jason since the fall of my sophomore year,” Johnson said. “We thought maybe we were starting too early, but since many coaches couldn’t recruit in-person last summer, it was really helpful to get exposure through ScoutU. ScoutU gets coaches interested enough to come to your games, see you play live or ask for video. Then, it is up to you to keep them interested.”

As a team captain and multi-sport athlete, Johnson is used to a high level of responsibility. Her athletic tools, along with that mental strength, will definitely prove valuable on the college softball diamond.

“We thought maybe we were starting too early, but since many coaches couldn’t recruit in-person last summer, it was really helpful to get exposure through ScoutU. ScoutU gets coaches interested enough to come to your games, see you play live or ask for video. Then, it is up to you to keep them interested.”