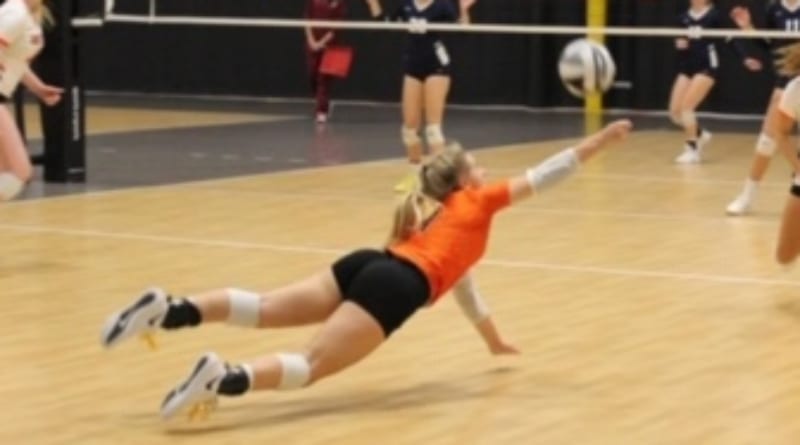 Casey Miller was contacted by 30 college coaches during the recruiting process. She had phone calls or Zoom meetings with about 15 of them. And now during her senior year, Miller has committed to Aurora University, an NCAA Division III program in Illinois.

“I am more excited than I can even express!” Miller said. “I have more to learn from coaches, teammates to play with, and games to win! This is an incredible opportunity.”

A libero and defensive specialist from Hartford Union H.S. (Wis.), Miller averages 9.2 digs per match. She received all-conference honors as a junior, while also helping her club team (Wisconsin Premier) to third place at nationals during 2019.

“When looking at colleges, I was looking for the whole package,” Miller said. “Aurora met all of those needs and more. The campus is beautiful, the academics are highly rated, the coach was personable and easy to work with, and best of all it felt like home the first time I walked on campus.”

Aurora is adding a valuable piece to its already impressive program. The Spartans are coming off two conference titles and three straight trips to the NCAA Division III Tournament. Aurora has booked a 102-37 record over the past four seasons.

ScoutU’s Chad Tuszkiewicz has seen Miller in action multiple times. He expects her talent and effort to translate to the next level.

“Casey has an infectious personality,” Tuszkiewicz said. “Casey is a very easy person to talk with. She is driven to improve every day, and put in the work necessary to get better. Casey is a solid and intelligent volleyball player, and I believe coaches saw that in her. I think Coach Seitelman saw that from Day 1 and made it clear to Casey he wanted her part of his program.”

During her career, Miller has received accolades like Most Improved and Biggest Heart from her teammates. But in order to receive those college offers, she had to get the attention of coaches across the country.

“ScoutU opened doors that I wouldn’t have known were available to me otherwise,” Miller said. “Chad was a great asset when it came to the tough questions and the details.”

“ScoutU opened doors that I wouldn’t have known were available to me otherwise. Chad was a great asset when it came to the tough questions and the details.”