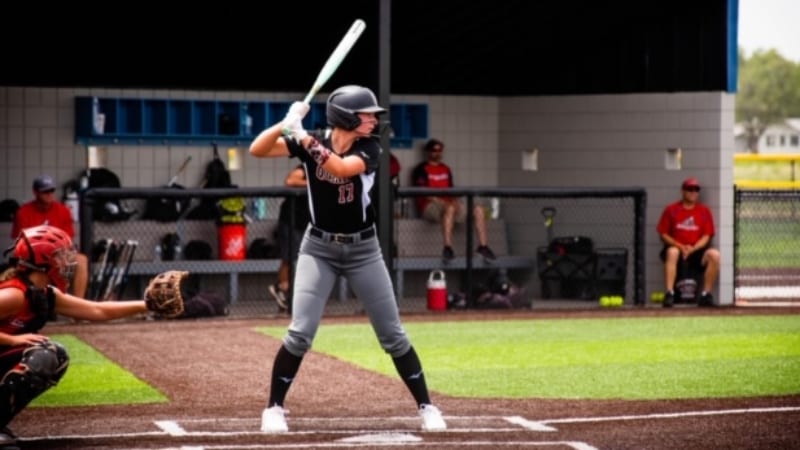 September 1 was a very important day for the softball class of 2022. That’s when NCAA Division I coaches were first allowed to contact Maggie Helms. And just as she hoped, the University of Maine gave her a call. Helms, a 2022 outfielder from Lincoln, NE, wasted no time and accepted the offer to play collegiate softball.

“Within minutes of posting her on social media, I was contacted by a coach asking about her,” ScoutU’s Scott Woodcock said. “Then, several more and then several more. Maggie’s No. 1 was the University of Maine. She told me often in text messages, and I had already sent her stuff over to Coach (Mike) Coutts. Leading up to September, Maggie was receiving lots of interest from D2 coaches. She had been a ScoutU kid less than 2 months when her dream school called on September 1st, and I was beyond excited for her.”

Helms possesses all the tools that college coaches look for, including a .511 slugging percentage, 60 mph throwing arm and 2.9-second speed to first base.

“Maggie is an exceptional athlete,” Woodcock said. “But like most kids from her area, she found it hard to navigate the recruiting process and get noticed. With COVID-19, the recruiting landscape has changed dramatically. The normal 13,000 kids recruited each year is going to be less than half of that now with everyone being granted a fifth year. These kids need help more than ever.”

In addition to her strong build (5-foot-10, 155 pounds), Helms owns a 4.0 GPA in the classroom. She’s looking forward to this rare opportunity.

“I’m so excited!” Helms said. “Playing in college has obviously been a goal of mine for so long. I’ve worked extremely hard at softball for so long as well. It feels really good to know that all my work has finally paid off. After talking to the Maine coaches, it felt like the program would be a good fit for me, as I would be for their program.”

As Woodcock emphasized, the recruiting landscape has changed over the past year. With coaches unable to attend games, ScoutU’s network becomes even more valuable.

“If it wasn’t for ScoutU, I wouldn’t be recruited,” Helms said. “Especially with all of the restrictions right now with my class, it was very helpful. Scott put my name out to so many amazing coaches. He guided me through the whole process, held me accountable and made sure I was doing my job all the time. This made the process go as smooth as possible, which I am so thankful for now.”

Woodcock has helped hundreds of families over the years, so it means a lot when he praises the teamwork from a family like Helms’.

“Maggie’s family was a pleasure to work with,” Woodcock said. “When the kids do everything we ask as recruiters, communicate well and maintain a high work ethic, the process is magic. They have no idea how important the communication factor is. Maggie understood, and she did it! The world needs more kids like Maggie Helms. My friend Coach Coutts is getting an amazing kid, and Maggie will do big things up there — I have no doubt. I’m so excited for her!”

“If it wasn’t for ScoutU, I wouldn’t be recruited. Especially with all of the restrictions right now with my class, it was very helpful. Scott put my name out to so many amazing coaches. He guided me through the whole process, held me accountable and made sure I was doing my job all the time.”