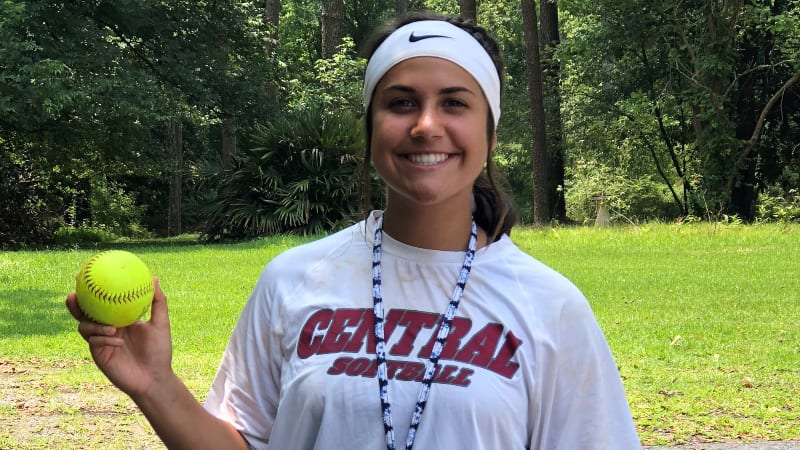 Hayden Salter had an amazing 2018 season that featured nine home runs, 10 triples, 22 doubles and 55 RBIs. Opposing pitchers definitely couldn’t slow her down. Unfortunately, a knee injury did, and she had to re-evaluate her college softball trajectory.

The 2021 outfielder then worked her way back onto the field, proved herself and accepted an offer to Fairleigh Dickinson University, an NCAA Division I school in New Jersey.

“I am so grateful to be given this opportunity,” Salter said. “Not many girls get to play college ball, let alone D1. I am so, so excited and can’t wait to start my new journey as a Knight!”

ScoutU’s Scott Woodcock first connected with Salter as an 8th grader. Her speed (2.9 seconds to 1st) wasn’t the only thing that deserved attention.

“First, I noticed her strong arm and was impressed,” Woodcock said. “Hayden impressed more when she doubled in her first at-bat of that game, driving in two runs and followed with a dinger in her next at-bat. I invited her to work with me that day, and I’m so glad I did. Hayden and her dad are now considered family.”

Salter had lots of interest after joining ScoutU, but some coaches were hesitant because of her injury.

“The summer before my junior year, I tore my ACL, had to have surgery and go through the recovery process,” Salter said. “Summer is probably the most important, because it’s right before colleges can start communicating with you. Coach (Chris) Foye at FDU believed in me despite my injury.”

“At FDU, the team felt like a family, much like my high school and travel ball teams that gave a sense of home,” Salter said. “When I went on my visit and met the team and coaches, nothing felt awkward. I felt like I fit in right off the bat.”

Even for Division-I talents, recruiting can be complicated. Salter made sure that she had the best support system possible to real her goal.

“Scott Woodcock made the whole recruiting process easier on me and my parents,” Salter said. “He told us what we needed to do, and we did it. He also helped me get where I needed to be, to be able to get recruited and committed.”

Now that Salter has committed, Woodcock is proud that she didn’t let anything get in the way of her dream.

“Hayden’s fight to overcome adversity and not let that injury derail her goal just amazes me everyday,” Woodcock said. “She’s going to her dream school, 20 minutes outside of her dream city, and she’s earned every bit of it. She’s stronger and faster than she was pre-surgery, and I’m excited to see her play at the D1 level!”

“Scott Woodcock made the whole recruiting process easier on me and my parents. He told us what we needed to do and we did it. He also helped me get where I needed to be, to be able to get recruited and committed.”