Ryleigh Murray had accepted the fact that she’d been overlooked during the recruiting process. Then ScoutU’s Scott Woodcock saw her play — and was surprised that she wasn’t committed yet.

After talking with 15 different colleges and taking several visits, Murray committed to Fort Valley State University, an NCAA Division II school in Georgia. And it didn’t take long, as she found her home within one month of becoming a ScoutU prospect last spring.

Murray, who is a 2019 graduate from Dalton, GA, always dreamed of playing at the next level.

“My parents made it clear to me that I would further my education, whether I played ball or not, so that fact that playing a sport I love is going to help me do that is amazing,” Murray said. “It is hard to express how excited and nervous I am to continue my softball career.”

Despite a fastball up to 58 mph, Murray found it hard to get noticed by the right softball programs. She also is a threat at the plate, hitting .438 during her travel ball season.

“Ryleigh is a happy-go-lucky kid with a passion for her family and the sport,” Woodcock said. “Her personality is contagious, so I knew instantly that she not only had the skill set to play at the next level, but also had the intangibles that so many coaches look for.” 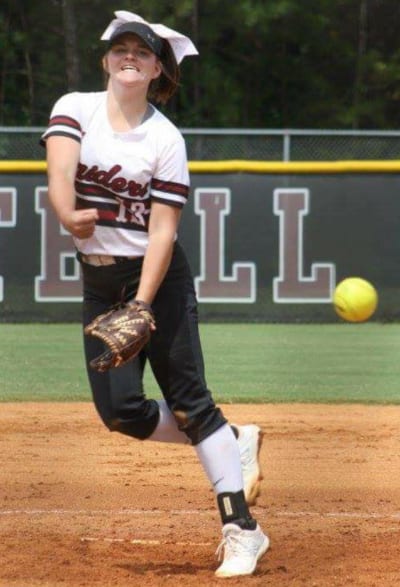 Murray found what she was looking for with head coach Jason Bryant at FVSU. The Wildcats are an improving team, racking up 32 wins over the last two seasons after a four-win 2017.

“What stood out was the welcoming atmosphere of the campus and everyone there,” Murray said. “The team and coaching staff treated me like I was already part of the team from the minute I met them. From the first phone call, I clicked with coach Bryant. He seemed to understand where I was coming from; he seemed to get me.”

Murray’s skill set will give her the opportunity to play as a freshman. She has good size (5-foot-8, 174 pounds) and the ability to play outfield and first base. Woodcock’s scouting report states that she has good movement on her pitches and can locate well. Murray was named to the 2nd-Team All-Area during her junior year.

“On her visits, she took a very grown-up approach, because it was no easy task,” Woodcock said. “She had some great offers at some nice schools with amazing coaches, but at the end of the day, FVSU was the one she kept referring back to.”

Murray, who owned a 3.4 GPA at Whitfield High School, is grateful that her hard work on the diamond will pay off with a college education.

“Before Scott, my recruitment was non-existent,” Murray said. “I had been to a couple of camps, but I was slowly coming to the realization that I may not play ball in college. Within minutes of signing with ScoutU, I already had a college interested in me.”