When ScoutU Southeast Head Scout Scott Woodcock first saw Madison Spell play, he immediately knew she had what it takes to play in college.

“Madison is an exceptional young lady,” Woodcock said. “From the initial observation, Madison 100% fits that ‘box’ we look for in a prospect. She’s 5-10 and weight proportionate (157 pounds), strong, throws well, beast with a bat, she’s a lefty pitcher, etc.

“All of that aside, Madison has one of those types of personalities that you just want to be around. She’s positive and upbeat, gets along with everyone and simply put, coaches know that this translates well when you’re talking about the overall team environment. So, she’s a stud on the field and a kid coaches want in the dugout.” 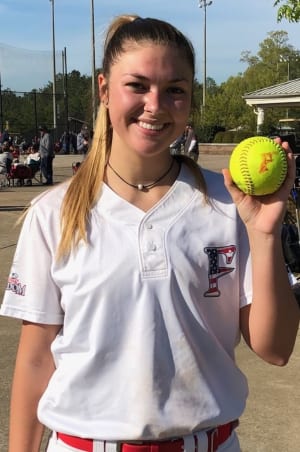 Spell’s fastball sits at 62-63 mph and touches 66 mph, which is exceptional velocity for a junior, especially a lefty pitcher. She also batted .441, had a .611 on-base percentage, had a .913 slugging percentage and belted 11 home runs during her 2018 club season. Spell is attending Collins Hill High School in Lawrenceville, GA, and also plays for the Georgia Firecrackers.

“Madison had a ton of attention and a half dozen offers,” Woodcock said. “She did everything I said: communicated well and was relentless in chasing her dreams. She didn’t put off visits or the necessary camps I set up for her, which can ultimately make or break an athlete’s chances, and she continued to work hard. She was receptive to my feedback and embraced the process. This is how she made herself stand out from all of the others, and I am honored to have had the privilege to guide her through it.”

Spell also received offers from three other NCAA Division I schools, two NCAA Division II schools and had several others that said they would make her an offer when they saw her play outside of camp. Spell also said “so many” colleges called showing interest.

“Scott Woodcock has done an amazing job in getting me recruited,” Spell said. “He has been with me since the beginning of my recruiting process, and I wouldn’t have wanted to spend those times with anyone else. Scott is such a well-known recruiter, that most colleges actually respect what he has to say about his recruits, and they listen! It’s unbelievable how much he and ScoutU have done for me, and I couldn’t feel more blessed!”

“Something that stood out about GWU to me is the level of interest the coaches had in me,” Spell said. “They could see that I am going to go far in my college career, and they wanted to be there for that, which I thought was amazing. I also loved the campus and how convenient it was to walk around campus. Everything was in walking distance!

“The team is also amazing; they were just so welcoming that it made me feel like I actually belonged there. I also loved how the coaches interacted and treated the girls on the team and really did coach by their supportive coaching philosophy.”

There’s no doubt GWU is getting an elite talent in Spell. With her committing 15 months before she graduates and about 8 months before the NCAA National Letter of Intent signing period starts, it shows how she is an outstanding player.

“Words cannot express the level of excitement I have to be playing softball in college,” Spell said. “It has always been my dream to play Division I softball, and my dreams are finally turning into reality. I am so excited and blessed to be able to have this amazing opportunity to be playing at this amazing school.”